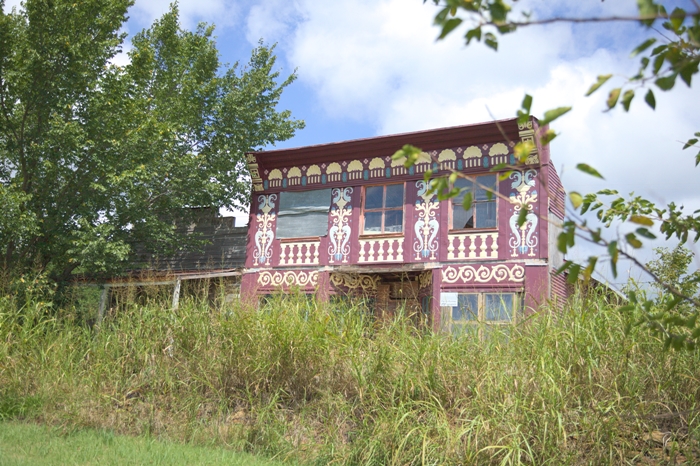 Well, maybe not. In another time, though, you can imagine what a wonderful place this must have been. At first, I drove past, but I knew I had to turn around. There was a story here, and I wanted to find it.

Pulling onto the property, just beyond the “No Trespassing” sign, I stepped out to have a look around. As you can see from the photos, it’s been a long time since anyone has done much in the way of maintenance. A couple of windows are broken, and the wooden porch sags. Oddly, the colorful paint has withstood the years well.

On private property, before I do any photography, I always ask permission. In this case, I had to follow a pair of tire tracks up a small slope. From the top, I saw a pretty little house, and some out-buildings. The Bermuda grass is kept short, and a few manicured trees dot the property.

From behind a line of bushes came a long-haired little dog, yapping at me, followed by a galloping full sized English sheep dog. A deep bark welcomed me, as it’s paws landed on the fronts of my shoulders. “Hello, New Friend!”, is how I interpreted this greeting, “Petmepleasepetmepleasepetmepleasepleasepleasepetme!” So, I did. Although it’s difficult to walk in such a situation, I continued my trek toward the house.

The owner appeared from behind the same bushes; a senior woman, probably a little older than I am. Her silent gaze seemed amicable, if cautious, so I smiled and said,”I dont even get a welcome like this at home!” She remained stoic.

“I saw that marvelous building from the road, and had to stop,” I said. “I’d like to do a few photos, if you dont mind.”

“There’s a ‘No Trespassing sign”, she said, pointing back the way I’d come.

“Yes, I know. That’s why I left the car behind and walked up”, I replied.

“People dont respect your property, anymore,” she said, “They’ve broken windows, kicked in the door and torn up the inside.” Her finger pointed toward a place on the other side of the hill, “I had a statue of an eagle on the pedestal, down there. Somebody just pulled right up and stole it.”

“I’m so sorry to hear that”, I said, “but that’s why I came up to ask permission. If you dont want me to shoot, I’ll leave.”

“No”, she said, still stoic, “I dont mind if you take pictures. Just dont go on the porch, or inside. It’s not safe.”

This made me feel a little more at ease, so I ventured a question, “So, what’s the story with this building? It’s lovely, and must have really been something, at one time.”

Shifting her weight, she began, “We bought the place and set up a farm market. It was the only one around here, and we did alright. We had planned to expand to the upper floor and sell antiques, too. Then we got divorced, and the finances were just never there, and I finally had to close it up.”

What a sad, but all too common way for things to go. I didnt ask what caused the divorce, or how long she’d managed to make a go of it. “I’m sorry”, was all I could muster.

Turning back the way I’d come, I thanked her, and assured her that I’d stay off the porch and outside the building. The dogs also seemed to know we were done, as they just watched me walk past. 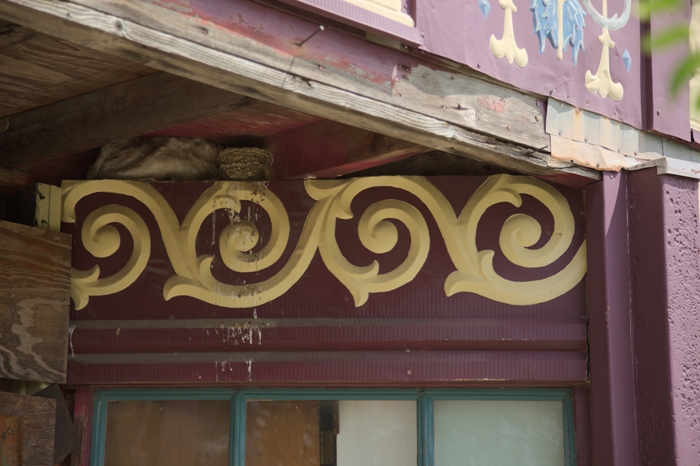 Apparently, there are some who feel comfortable living there.

On the broad lawn, I found these huge mushrooms. 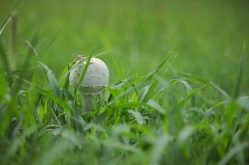 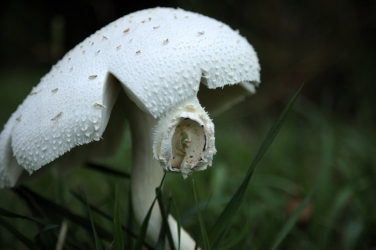 This bush was growing through the frame of an old wagon. Couldnt resist a few frames. 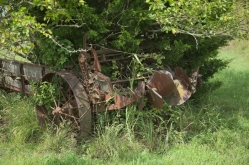 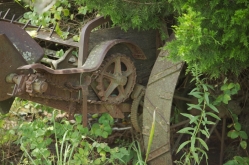 Once again, you never know what you’ll find, if you get off the interstate and travel state highways.

That’s if for me. I’ll share again soon. In the meanwhile…