For most people in this hemisphere, it’s the Dog Days of Summer. The same is true up here in the White River National Forest, but at 9,000 feet above sea level, the temperatures a somewhat more tolerable. “Partly cloudy, with a chance of afternoon showers” is the usual forecast. Already, though, days grow shorter. Skies are darker when I wake up, and cool early morning temperatures have me reaching for an extra blanket.

Spent my first night in the new vehicle, and a few “to-do”s presented themselves. For example, I need to build a half-height closet that can be relocated when needed. Also, a layer of polyiso insulation is compulsory. Reflectix works well for now, but very soon it wont be enough. Not sure about the ceiling, yet. Perhaps I’ll hang some kind of textile treatment over the insulation.

If you get the feeling that I’m stalling on photos, it’s because I am. The new ride has some features that make it ultra-versatile, with regard to seating and sleeping arrangements. Also, there are a couple of things that need to be fixed before I show it off to you all.

What I will show you is my new Little Jumbo travel guitar, from Alvarez.

It’s very light, but well made, with a solid spruce top.

While it doesnt hve the deep bass you get in a dread, it’s much more suited to playing in the close quarters of a vehicle. 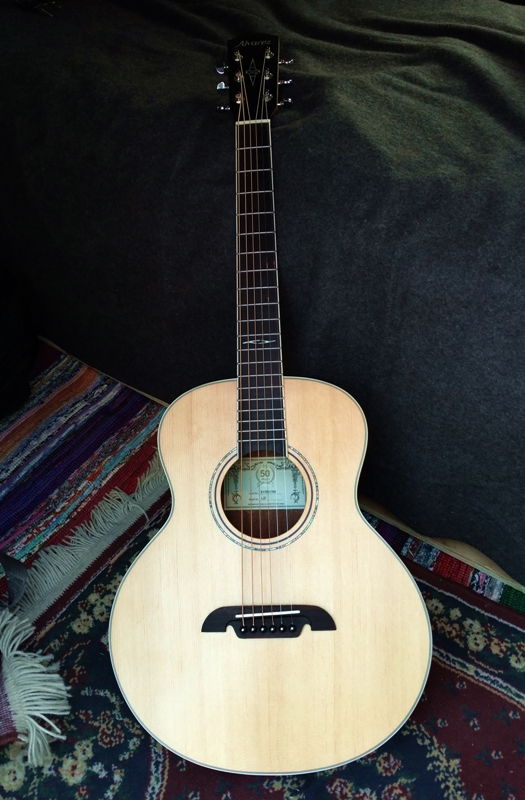 Despite it’s small size, it does deliver a nice range, with unexpectedly warm tones that ring for a while. The action is high, which I sometimes think is an intentional way to get a set up fee for the dealer. Still, I’m digging it.

There are other things to share, but I’ll save them for later posts. Look for some videos soon. I’ll post links, when they’re up. In the meantime-